“Generation HC,” or the “High Caliber Generation” is what I’ve begun calling young people I’ve come into contact with in the world of shooting sports.  These “kids” are extremely focused, mature, and disciplined – but they have a lot of fun, as well.

The first Gen HC member I reported on was “Allie Cat” Barrett, and you can read that interview here.  Allie is a member of the fast-growing sport of practical pistol shooting (and I hope to talk her into writing a detailed description of her favorite sport for me soon), but we are about to turn 180 degrees and talk with a young woman that is a Project Appleseed rifle instructor – at the ripe old age of 18. 🙂 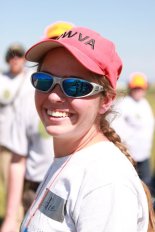 Leslie Cernik of Idaho, aka Western Rose, is an amazing young woman whose dad taught her to shoot a rifle at an early age, and who actually became a Revolutionary War Veterans Association Instructor and Range Safety Officer at the age of 16.

As Leslie says of her early days, “My Dad started to teach each of us to shoot as soon as we could tell him, from memory, Cooper’s four safety rules.  He started us out with a small .22 pistol.  When we were big enough, Dad would put us behind a Marlin Model 60 .22 rifle with iron sights and the use of a big log as a rest.”

She explains her introduction to the Appleseed organization by saying, “When I was 12 or 13 my Dad asked if I would like to go with him to something called ‘Project Appleseed.’  I had no idea what it was, other than I would be shooting all weekend with my Dad.  That sounded like fun, so off we went. 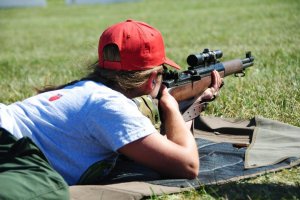 I learned the Steady Hold Factors of prone, sitting, and standing; I found out the great secret of needing to find your Natural Point Of Aim; I was taught the Six Steps of Firing a Shot; and on top of all that, just when I needed a break, the instructors would tell history.

I have always liked to read, but have never been good at remembering dates, events, names…until that weekend.  I learned SO much [Revolutionary War history] that I wouldn’t have learned any other way.  The instructors were definitely welcoming to me, even though I was, by far, the youngest attendee AND the only girl on the line…not  to mention the only .22 shooter.

At the end of the weekend, I left with a smile, new friends, and the high score of my family (a 198 of 250).  That was my first experience with any kind of organized shooting event and I loved it.”

Leslie said the ratio of men-women-children on an Appleseed line has changed drastically over the years and now entire families are signing up for the events.  And if you are unfamiliar with Project Appleseed, this is an organization that teaches rifle marksmanship and the importance of the American Revolutionary rifleman to the freedoms we enjoy today.  All levels are welcome at these very inexpensive events, from beginner to expert, and those who excel at the course may earn their Rifleman patch.

Leslie is not only an Appleseed instructor, she is also a homeschooling high school senior, as well as a college freshman, a writer, a horsewoman, photographer, blogger, and much more.  Her Appleseed involvement has even moved beyond the shooting line, and into administration of the organization.

I asked Leslie some questions about her shooting and will let her speak for herself:

Q.  What three life lessons have you learned from shooting?

A.  “Shooting has taught me persistence, confidence, and how to relax.  Seriously.  Persistence is on that list because it’s not always easy.  You have to work through the        problems and find a solution.  You can’t give up.  That’s something that easily transfers into everyday life (and school work!).

Confidence is listed because when you go from not doing so well, to achieving a goal, it will boost your confidence to know that you can work through this issue, that persistence will pay off.  Plus, there is nothing like the feeling of confidence when you get down behind a rifle, see a target, and know you can hit it.  You realize you aren’t helpless.

How to relax is another thing that I’ve found particularly helpful.  I used to tense up when I was shooting, so for me, learning to relax in a tense situation is very useful, and not only in shooting.”

Q.  How has shooting played a part in how you relate to your peers? 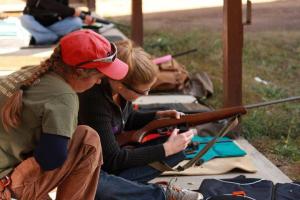 A.  “Presently, a lot of my peers aren’t super interested in shooting or history.  That has been troubling, but I still definitely enjoy my time with them.  Maybe someday they’ll come along with me to a Project Appleseed event and realize that this is THEIR heritage.  I have found that I definitely don’t ‘fit’ in just one age group.  I thoroughly enjoy learning from those who are older than myself, and then taking what I learn and teaching it to others.”

Q.  What is your favorite firearm?

A.  “My favorite firearm would definitely be a rifle.  I REALLY like the M1 Garand.  That would be my favorite specific rifle, but I do enjoy shooting the M1A, AR, and the .22s, as well.”

Q.  How has your schooling affected your shooting “career,” or vice versa?

A.  “Being homeschooled, I was hardly ever put in a classroom with a bunch of kids my age.  That made me learn to communicate with both adults and kids.  I have found that learning isn’t just in the classroom; it’s all the time.  In shooting, I’m with people who are anywhere from 13 years younger than myself, to 60+ years older.  I have a lot of fun being with folks that are older than myself and learning from them, so it works out well.  Also, it gives me an appreciation for the wisdom of the gray head – ok, you don’t actually have to be going gray to be wise” 🙂

Q.  What is it like to compete (and win) against people older than yourself?

A.  “Competing has always been somewhat hard for me, in that I tense up (good thing I’ve learned to relax!)  Now I enjoy competing with folks of all ages.  I now know that if I lose I’ll be learning more, and I’ll come back to try again and again until I win.  Winning is exhilarating and continues to build my confidence.”

Q.  What would you like to tell new shooters – young people that are just getting interested in shooting?

A.  “I think I would tell new shooters that it is a lifetime of fun.  Shooting is a journey, where people will come alongside you, help you along the way, and before you know it, you’ll be helping others who are newer to shooting than you are.  You will learn more than you can even imagine – and shooting a .22 doesn’t hurt.  Take that first step, come on out, and enjoy it!”

Q.  How do you see yourself involved in shooting 20 years from now?

A.  “In 20 years, I hope that I will still be teaching others how to shoot, and telling others about our mutual heritage.  I also hope that I will have been able to shoot a perfect score on the AQT (Army Qualification Test).  I would like to learn more pistol shooting and maybe shoot in competitions (both rifle and pistol) sometime.”

Of her role as instructor, Leslie said, “Instructing has helped me grow significantly as a person.  The first time I talked in front of a crowd, I was 16 and there were 72 attendees and 6-8 instructors.  I was honestly freaked out about the idea of talking in front of a group.  Talking to a small group of friends was hard enough, but now I was talking to folks that, for the most part, I’ve never met before.

The other instructors, all quite a bit older than myself, really helped me work through being scared and getting up in front of people, despite my fear.  I didn’t have the confidence that I wouldn’t really mess up, but I knew that if I did, the other instructors would pick me up and help me along.

My ‘trail’ hasn’t been the adventure of one person, it’s been the adventure of many.  People from all over this nation have come alongside me, picked me up when I failed, guided me and taught me.  I continue to be taught by them, and many more have become my teachers, friends, and family over the last couple of years.  Each has built on the foundation that my family, specifically my father, gave me.  I have become an extension of my teachers, and I only hope that I can teach others as well as they have taught me.”

Check out Leslie’s blog at The Little Adventures of Western Rose.